The clean up of Manchester’s abandoned gas stations continued last week as excavators dug up and removed disintegrating storage tanks that were leaking petroleum into the surrounding soil and ground water. “Adams County is pleased to get started cleaning up several of our abandoned gas stations. The effort put forth by our Economic and Community Development Department captured approximately $600,000 for the Village of Manchester and will continue to tap these resources for cleaning up Adams County,” said commissioner Ty Pell.
Funding for this project was awarded by the Ohio Development Services Agency. Projects are evaluated on the impact cleanup will have on the environment, the community, and the local economy. “We’re funding local initiatives to transform blighted, high traffic corners into viable sites for development,” David Goodman, director of the Ohio Development Services Agency. We’re making what’s old new again.”
The Darby family property located at 351 West Second Street was allotted a $100,000 grant, while the former Palmer’s Ashland station at 501 East  2nd Street received $416,000. The grants were administrated through the Adams County  Economic and Community Development office which pursues innovative solutions for revitalizing local communities.
“We were on the ground and ready to go when this grant became available,” said Holly Johnson, Director of Adams County Economic and Community Development. “The Board of Commissioners , the Economic and Community Development office, and Michael Weinstein with Patriot Engineering are partnering with the Village of Manchester to add tangible economic value to help revitalize their community.”
According to Weinstein, the cleanup involves a two stage process. First, chemicals are injected into the site to destroy the leaked petroleum, then a natural biological activity takes over and restores the earth to its natural state. The sites are then refilled with back fill and capped off with gravel. The empties tanks are cut open ad cleaned out before being hauled to a scrap metal yard.
While the tanks have been removed and investigation completed at the former Ashland station, work is ongoing at the Darby location. “At Darby we pulled the tanks, back filled the hole, collected soil samples which we’ll send off to a certified lab to see what the level of contamination is,” said Weinstein. “We’ll come back after that and install ground water monitors to define the impact on the soil and water, and based on that we’ll make a decision about whether or not we need to excavate the soil and take it to a recycling to finish the cleanup.”

Article written by Pat Beech published in The People’s Defender for the  April 26, 2017 edition 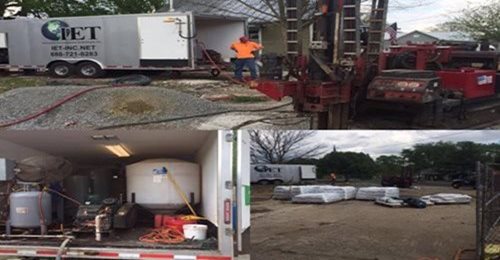